Here we will meet history of the world where our story takes place. You will receive some informations about its creation, historical development and the  War for Kenakarra rose reasons.

Kenakarra Rose is a powerfull magic plant coming into flower every 10.000 years. …

Forces of nature are the only source of magic in the world of Illada. Every entity grew up through magical flora here. When the story begins, there is only one magical plant left – the Kenakarra Rose that is coming into flower every 10.000 years. The one and only bloom. It is the most powerful source of might and gaining control of it brings its holder control over every magical flows and because of it dominancy over lands of Illada. Well, getting it is not so easy. You have to do much more than just pluck the bloom…

Illada - the magic world where our story takes place - was born a long long time ago from the real needs of Liayates. They had great power to move and fly through the space without real bodies. They did not depend on time as people, so it is very hard to talk exactly about some time periods of their existence. But we know that after a long long time they wanted to live some different life.Their souls wanted to know and to feel something new and different what they did not know yet. So they started to create new worlds due to their great magic power. Firstly their worlds were similar to abstract works of delirious artists, but later they created worlds similar to our human reality. Their works were beautiful and its forms were wonderful. And later when they wanted to be the members of the real world they created their own bodies to be able to move through their worlds and to feel everything that belongs to body existence.

That was the beginning. The Liayates created lots of worlds, but each of these worlds had no own life. These worlds were beautiful and wonderful, but they were sterile and dead. In the end they created completly different world. Some Liayates created here real life. Magic and powerful flowers.

These flowers were given by Liayates life energy – the source of all magic as it was called much more later. These gigantic flowers were real organisms full of life.And the whole world looked like one giant garden soon. Magic flowers were full of life and the Liayates were able to talk with them, to enjoy their feelings and they were very happy to see how they grew.

Life from the Magic Flowers

Later some of these flowers started to change. Four of many flower varieties created by powerful Liayates started to be little bit different. They changed into the fountains of new life. The wombs of new life.They shut their beautiful blossoms and when they have opened new entities were born.

These are four noble races born from four gorgeous flower sorts created by the Liayates.

Although the Creators have a great power, they did not know exactly, what has happened. They had no idea how to create the new life from their own creations. These noble entities born from magic flowers were very similar to the Layiates but they vere much more smaller.

The Creators loved their new children and they wanted to receive another ones. Created a large world and they wanted to settle it by their own creatures. Another flowers had its own existence and they were not able to give any new life and create any new entities. It kept on a long time and there were no changes with flowers, so the Liayates started to create again. It was the time of wonderful and powerful creation and the Creators created many sorts of flowers. Many new beings were born this way, but nobody of them – the second generation children of magic flowers - was full of such a light and noble like the first ones.

The world was settled by new entities. People, The Dwarfs,The Brakhs, The Grokthars, The Silds, The Khabrags, The Ukhls and many others. And also another creatures called animals.


The Life on Illada

The newly created beings inhabited most of the territory of Illada. But while the firstborn noble Elves, Farseas, Kworgs and Guiulthans grew into the light and they still loved their creators, another races created from the second generation of magic flowers, were less noble and much more unaffected.They did not want to meet their creators and they were fearing them a bit. That is why many Liayates were very disappointed. They were keen on those which were not created with some particular idea. And those, which were created with the most noble ideas, were standing deeply in the shadow of their firstborn brothers of noble races.They left their creators. They admired them as their gods, but they were afraid of their power.


And so only the firstborn noble brothers spent their lives near their creators and teachers. They were studying the magic flows of nature to be able to use all kinds of magic power given them by their creators knowledge. The most gifted were the Guiulthans and especially one of them – called Sornion. He was appointed as their nation leader. He was the most gifted and powerful one between all the noble beings.


Since the beginning of their existence all the beings born from magic flowers were given by special gift of creating new life, to born their own descendants. But soon it was clear that the firstborn were immortal and their bodies were still young, another races were not immortal, they became old and died. So the gap between them was increasing, envy, lust for power and immortality of noble beings – these were the reasons why they stopped understand to each other. The world was not such a beautiful place like the Liayates would like to imagine it anymore. Nevertheless, they tried to teach those who remained faithful to their ideas and tried to help those who were able to take their help. But this way the younger beings were more and more isolated.

Illada (the translation from ancient noble races language it means "Fountain of Life") world was full of many varieties of life, but the Creators were not happy. The first generation of entities – four noble races brought them only joy and happiness, the second generation had no noble light inside. And it was sad to see how many races are changing into bad and selfish individuals with no sence for interests of their nations and communities. 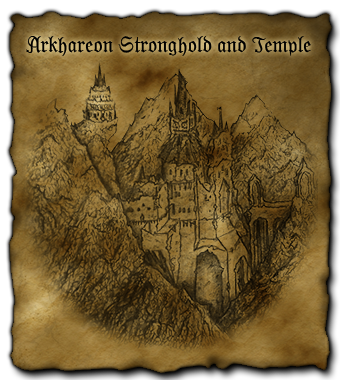 Arkhareon is an old time temple built long long time ago. It has a very important sence for Kenakarra Rose history. Why? Wait for these information :-)